Warum gibt es Not without us!?

Not without us! fordert eine transformative und geschlechtersensible Klimapolitik

Artikel von Not Without Us!

Der Not Without Us! Podcast.

Videos von Not Without Us! 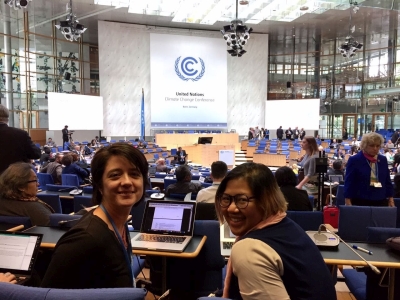 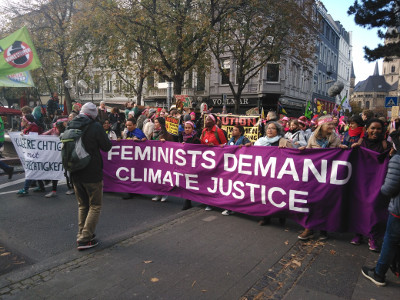 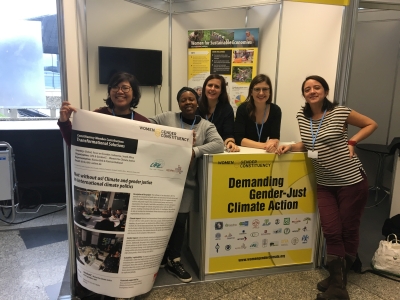 Not without us! beteiligt sich aktiv an den UN-Klimakonferenzen

Artikel von Not Without Us!

Der Not Without Us! Podcast.

Videos von Not Without Us!

CSW66 – Commission on the Status of Women

Podcast „Not Without Us“

On Friday, 5th December LIFE & GenderCC conducted ‘progress of the day’ at the German Pavilion. Aim was to talk about gender equality and human rights in the PAWP. The speakers specifically looked at the NDCs, Article 6 and adaptation communication from a human rights and gender perspective.

From local approaches to (inter)national policy: Gender Just Transition and Decent Work – side event at COP24

On 11 December 2018 Rosa Luxemburg Stiftung, together with GenderCC and LIFE held a side event at the COP venue. As this COP had a particular focus on just transition the panellists of this side event discussed about how Just Transition is to contribute to greater equality and justice. Activists from three different regions provided examples about the needs and conjunctions of feminist and just transition movements in their countries. In order to be transformative just transition needs to challenge the inbuilt inequalities that exist between different social groups and move beyond a green growth agenda.

On Monday 3 December the project team implemented a workshop at the civil society space – the Greenpeace Climate Hub – in Katowice. The idea was to create a participatory space where a methodology used by local communities in the amazon region was jointly tried out by an international audience. This ‘body mapping’ methodology is used in Ecuador with local and indigenous communities.  Melissa Moreano explained: „Our body is our first territory!“- The methodology makes you understand in which ways climate change is directly affecting your most intimate territory – your body and inner life. In addition, it helps to realise personal strengths and common grounds in fighting against what oppresses us. The conceptual background is the communitarian and indigenous feminism.

Patriarchy vs. the climate: Why there is no climate justice without feminism

The public panel discussion on Friday, 30 November 2018 in Berlin showcased the importance of gender just climate politics. One day before travelling to COP24 in Katowice, GenderCC and LIFE together with the Rosa Luxemburg Foundation organized a panel discussion at Denkerei in Kreuzberg, Berlin as part of the project activity. The title of the event was inspired by Naomi Klein’s book „This Changes Everything: Capitalism vs. the Climate“ The panel talked about their success stories, why it is important to consider intersectionality in climate solutions and to continuously demand other policies, a change of the economic system, social justice and equal rights. The invitation was widely distributed through different channels and can be found attached to this report.
Speakers on the panel: Ndivile Mokoena (GenderCC Southern Africa), Melissa Moreano (Critical Geographers Collective Ecuador), Ilana Krause (Ende Gelände), Lorenz Gösta Beutin (member of the parliament, DIE LINKE).

One key area of activity of this project is to strengthen the three participants in their role as multipliers: on the one hand they inform the local level (communities, initiatives, organizations etc) on the relevance and demonstrate the linkages of the UN climate negotiations with the current situation on the ground. On the other hand they transfer climate justice struggles, local demands, local impacts of climate policies back to the international level. To put this into practice the  everyone implemented a local workshop in her region. All workshops took place from July to November 2018. The workshops captured the impressions, demands and positions of the people on the local level that and linked them to the international discourse.

On Sunday May 6, 2018 from 12 to 6 pm we held our second Capacity Building Workshop in Bonn. The aim was to create a common knowledge base about the state of negotiations and other relevant activities during the first week of SB48. The workshop gave an overview of the upcoming agenda of the three different UNFCCC bodies (APA, SBI, SBSTA) as well as short explanations of the relevant agenda items of the bodies. It also included a report back from the first week as well as a trajectory of this important year.

Gender Justice in the international climate politics: Getting Ready for SB48 – web based seminar

On Tuesday, April 24th, 2018 we implemented our 1 ½ hour long international online course. Patricia Bohland started giving an update on Article 6 of the Paris Agreement as well as on the current status of the negotiations under APA (Ad-hoc working group of the Paris Agreement) and in order to identify entry points for human rights language including gender equality. Melissa Moreano spoke about REDD+, fossil fuels and women: she highlighted the effects of REDD+ in communities in Ecuador and talked about the gender-based violence and other effects on women. Dinda Nuurannisaa Yura continued to describe the situation of REDD+ in Indonesia and presented the differences compared to social forestry. Ndivile Mokoena talked about Agro-Ecology at local level and her understanding for real climate smart agriculture in South Africa. Afterwards Lisa Göldner from GenderCC gave the audience an update on the Gender Action Plan that has been adopted during COP23. The web based seminar was facilitated by Nanna Birk, LIFE.

Supported by the Rosa Luxemburg Stiftung (RLS) with funds of the Federal Ministry for Economic Cooperation and Development of the Federal Republic of Germany (BMZ).